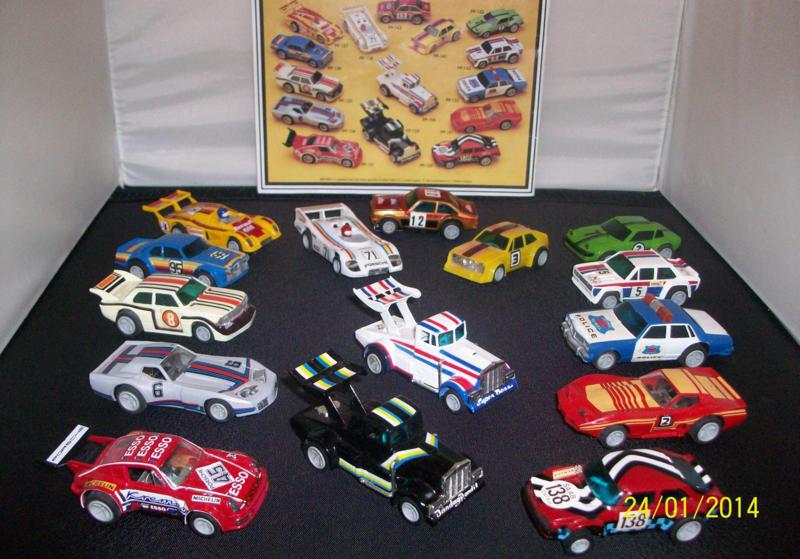 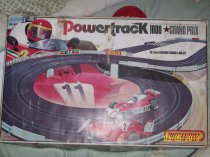 Powertrack (UK and Europe), Speedtrack (US), Speedracing (Japan),  and Lanechanger are brand names for Matchbox's toy slot cars sets. Introduced in the late 1970s, Powertrack and Speedtrack differed from other slot car sets because the cars be seen in the dark as the cars had headlights. Matchbox's H0/00 (approx. 1/64) cars were smaller than Scalextric 1/32-scale cars. 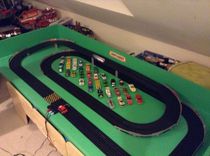 In the UK, Powertrack was a more affordable product than Scalextric and traded heavily on the Matchbox brand. With the smaller size, the layouts could be quite complex yet still fit in the typical 8×4 ft board size. Additionally, it did not sit out of place with H0/00 railway sets and Matchbox's own 75 die-cast range. Coupled with very dynamic exciting packaging, the Powertrack product was a brilliant gift for a child of the late 1970s and early 1980s. Peter Kay commented in his autobiography “The Sound of Laughter” that the Race 'N' Chase set he received for Christmas in the late 1970s was the best Christmas present ever.

At the same time as the Uk introduction of Powertrack, over in USA similar US sets with the Matchbox Speedtrack brand were released. 150, 200, 300, 1000. etc Details of these sets are found in 'the sets' section.

The later 12/18v cars and sets with bigger features were introduction in 1982, as more modernised cars and track with crossovers, a jump and even a loop the loop set.  Matchbox still had sets which were very competitive in price as well as include many features that buyers craved.

Later with PowerTrack Plus....

The rarity of several 12/18v cars is alledged to be due to a factory fire at the DAPOL warehouse.....'In 1994, while the company was moving to its previous location at Llangollen in North Wales, a huge fire destroyed the old site at Winsford in Cheshire, and large quantities of products and historical Wrenn material were destroyed.'  Those 'products' may have included a vast storage of the above cars pre-distribution. It is beleived that only some stocks were released with these cars, in Powertrack Plus, PROOPS and Counterlane sets. 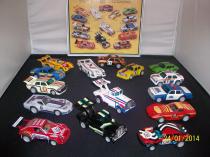 No longer in production, cars and sets can be purchased via eBAY with some rarer cars and sets commanding keen prices, like the red Saab 900 Turbo, yellow VW Scirocco, white Fiat, red Corvette and the gold livery Ford Escort. The rarer cars tended to be those available as a separate purchase only and not part of a set.

Many of the cars for sale today come with poor quality tyres as the rubber has aged, leaving the cars with no grip. The lack of grip results in the cars just wheel spinning without any forward movement. However, there are replacements available and it is still possible to buy brand new cars in sealed cartons, if you can find them. Silicon tyres are now the easy long lasting option.

The sets to look out for are the 'Copter Chase', rare PP2000, Race and Chase 2. Plus later DAPOL Counterlane sets . 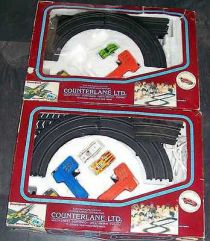 With the collapse of Lesney/Matchbox in the early eighties, the last official year of production was around 1982. Various attempts to buy the Lesney stock and continue selling the products were tried but subsequently died out. Most notably, Proops Brothers, of Tottenham Court Road, London.

They packaged together sets in plain white boxes and sold existing sets with all sorts of car combinations.

Latterly, several vehicles appear from time to time rebranded as DAPOL Counterlane but these too were short lived.

Counterlane sets (J-1 to J-5, since this a J-7 was also known to have been made and sold) and boxed cars can be found but they are rare. They used PT and PPlus based sets in an attempt to move ageing stocks. A rare Rally J7 set has been found in 2017 and this has to be a very rare find indeed, paperwork indicates it is authentic and original.

Details of sets can be found in 'the sets' section